Aerial or Airy is the first Spirit summoned by Taichi Nishimura and becoming one of the main characters of the Isekai Cheat Magician series. During the mid-climax battle in Azpire, she evolves back into her original form, Sylpheed (Sylphy), one of the Four Spirit Queens of Wind.

Airy generally takes on the form of a young female fairy.

Like all other spirits, they are beings to be considered to be above humans and dragons themselves. They cannot be seen through the naked eye, nor their voices are heard by regular humans unless they are of high magical aptitude.

Her relationship with Taichi was already reached before his summoning due to his pre-discovered magic capacity. Before Taichi's awakening as a summoner, she maintains telepathic communication with Taichi until being cornered by Cassim's Red Wolf where she briefly lends Taichi her power. It wasn't until Anastasia's death that Taichi acknowledges his unique power and formally pact a contract with Airy. 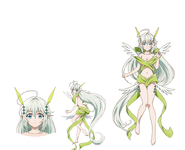 Anime Character Art
Add a photo to this gallery
Retrieved from "https://isekai-chiito-majutsushi.fandom.com/wiki/Aerial?oldid=1261"
Community content is available under CC-BY-SA unless otherwise noted.