Anastasia was a former assassin sent to dispatch against Taichi and Rin. After the duo spared her life, she decided to join the guild to get more closer to Taichi.

She has greenish - yellow hair with clear blue eyes. She is introduced in a black cloak with a hood, but once she was captured and later released she wore a revealing green dress with blue earrings and cloth "arm covers?"

She is a kind person and loves Tachi.

So far nothing has been shown about her past other than her being an assassin prior to her meeting Taichi and the others. 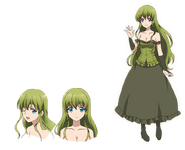 Retrieved from "https://isekai-chiito-majutsushi.fandom.com/wiki/Anastasia?oldid=1256"
Community content is available under CC-BY-SA unless otherwise noted.