Cassim is one of the antagonists in the Isekai Cheat Magician series. An evil magician and servant to Lodra.

After his first encounter with Taichi, he remains single-armed having lost his right arm.

Caasim first meets Taichi and Rin posing as a fruit farmer while really hindering the real farmers' efforts in selling their produce.

He specializes in summoning and controlling elemental spirits. 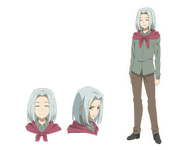 Retrieved from "https://isekai-chiito-majutsushi.fandom.com/wiki/Cassim?oldid=1187"
Community content is available under CC-BY-SA unless otherwise noted.