Charlotte Eristein is the royal princess of Elistein Magic Kingdom and King Gilmar's daughter of the Isekai Cheat Magician series. Capable of manipulating time and space, she was responsible for summoning Taichi and Rin to her world upon her father's order.

Charlotte has blue eyes and platinum blonde hair. She is seen wearing a white dress with grey lines and blue earrings and a crown that resembles wings.

Charlotte is the princess of Elistain and a magician, she was responsible for bringing Taichi and Rin to the world in order to protect her kingdom and the people from a future civil war.

Like Taichi, she is another unique magician being able to manipulate space and time. 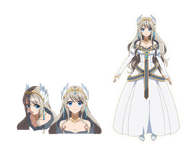 Retrieved from "https://isekai-chiito-majutsushi.fandom.com/wiki/Charlotte_Eristein?oldid=1277"
Community content is available under CC-BY-SA unless otherwise noted.