Grammy is one of the antagonists introduced in the Isekai Cheat Magician series. A Crimson Pact Magician and Cassim's partner who is a fighting maniac.

Grammy is a lone individual who is enthusiastic only on the battlefield. Her obsession is only about bloodthirst when engaging her enemies in single combat. Despite this, she has a warped sense of honor, despising underhanded methods like an assassination in lieu of facing her opponents face-to-face. 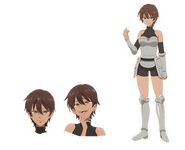 Anime Character Art
Add a photo to this gallery
Retrieved from "https://isekai-chiito-majutsushi.fandom.com/wiki/Grammy?oldid=1282"
Community content is available under CC-BY-SA unless otherwise noted.