Episode 1
Lemia Santacru is one of the four main protagonists of the Isekai Cheat Magician series. A Master Triple Magician whom everyone in the kingdom knows who she is due to her magical prowess, thus her nickname as the Magician of Fallen Leaves (落葉の魔術師). She taught Muller magic before teaching Taichi and Rin.

Lemia is a beautiful young woman supposedly in her mid to late 20's with clear skin and golden eyes with short unkempt black hair. She likes to wear clothes that show off her figure, has large breasts and an hourglass waist.

Lemia is seen to be a relaxed individual who is both kind and approachable. She appears to have some form of immodesty as she doesn't mind being seen in her underwear in her house as she claims that because it's her home she can dress however she pleases including having Tachi look straight at her breasts, or wearing revealing cloths in public or formal settings. She is also shown to be both wise and knowledgeable and gives advice to those who need it or helping others to become better in the ways of magic and as individuals. Lemia has proven herself to be quite a capable teacher as seen when she is instructing both Tachi and Rin in helping them to become better in magic so that they can handle the dangers of the new world they were in. When she discovered Tachi and Rin's extraordinary magic potential she seeks to mentor them in order for them to achieve their true capabilities as well to make sure they can handle themselves in a world full of dangers.

Before the series, Lemia resides in a forest located on the outskirts of Azpire, where she enjoys researching magic and cooking.

She can use spells of fire, water and wind elements, and also able to cast advanced spells without chanting.[1] 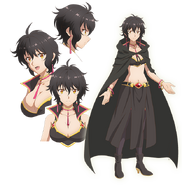 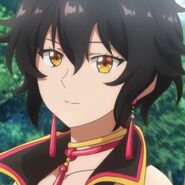 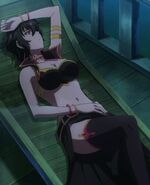 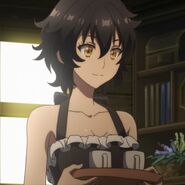 In the anime series Lemia has noted that she has lived a long life, which implies that despite her youthful appearance she may be older than she appears.

Community content is available under CC-BY-SA unless otherwise noted.
Advertisement