Episode 1
Muller is one of the protagonists in the Isekai Cheat Magician series. An Elf swordswoman and a former apprentice of Lemia, she is a Dual Magician capable of using the magical elements Fire and Earth. She is known under the title "Golden SwordsWoman" for her skill with the blade. Impressed with Rin's abilities, the two girls become fast friends.

Muller is beautiful young elven woman with a gorgeous face and blue eyes. She has long blonde hair with incredibly good looks, and due to this, other adventurers call her "The Golden Swordswoman".

Muller is a very kind and friendly girl with a mature and respectful disposition, she prefers to think situations through and deal with problems in a smart way but will take action when necessary. Before meeting Tachi and Rin she was somewhat of a lone wolf type of person who preferred to do things on her own and never thought about working with others before, however after meeting Tachi and Rin she has come to enjoy their company and is now seen spending most of her time with them. She also like to give credit where credit is due depending on an individual's progress or accomplishments. She also became fast friends with Rin due to being amazed by her quick mastery of magic.

Muller's life before meeting Tachi and Rin is unclear, however she is known around Azpire as a very skilled adventurer "The Golden Swordswoman". At some point she was a student of Lemia until she finished her training under her.

Muller is a preeminent dual magician who has mastered control over both fire and earth magic. She also incorporates her magic with her swordsmanship proficiency. Muller is so skilled that she can undertake A-rank missions and requests for adventurers. 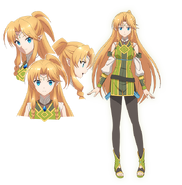 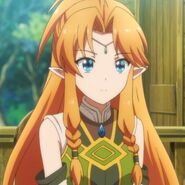 Muller surprised at Rin's use of magic

Muller and Rin fighting together