Episode 1
Rin Azuma (吾妻 凛, Azuma Rin)/Kanade Azuma (吾妻 奏, Azuma Kanade) is the female protagonist in the series. After being summoned to Altia alongside her childhood friend Taichi Nishimura, she decides to become an adventurer with him in the hopes of finding a way back home.

Kind, caring, considerate, thoughtful and mature are the best ways to describe Rin. She is shown to be very intelligent as well as a logical thinker who tries to rationalize situations. Despite being thrust into a new world and not understanding what was happening she was able to stay calm, collected and maintain her composure. Even though she is perfectly fine with slaying monsters she is adverse to killing people, even though she is aware that it's naive to think so but according to Rin she hasn't seen anything to prove that killing people is the right thing to do and would much rather avoid it if possible, this shows that deep down she is still an innocent girl with a soft heart. It is also shown that deep down she has strong feelings for Taichi Nishimura, but she is just to shy to admit them.

Nothing is known about Rin's life on Earth but what is known is that she and Taichi Nishimura have known each other since childhood and that she was apart of her schools tennis team.

Upon her being summoned, Rin is somehow gifted with immense magic power and possessing the affinity of the four major magical elements (fire, wind, earth and water) that she becomes the first known and rare Quad Magician in the series. Using and applying scientific knowledge that she learned in school she is able to come with new and highly powerful spells that can overwhelm most types of monsters and powerful enemies. She excels at casting multiple types of magic and spells at once, even combining them to create new spells with devastating results making her a very versatile magician. 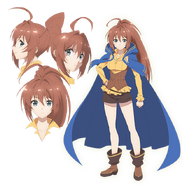