Taichi Nishimura (西村 太一 Nishimura Taichi) is the main protagonist of the series.

Taichi is a normal boy with athletic skills and gaming sense from RPGs. Despite having no sense of commitment, Taichi is able to keep a clear head during crises. He is very optimistic and kind, even to the point of self-sacrifice.

He can be a bit dense when it comes to girls and he thinks of Rin Azuma romantically even though they're childhood friends.

Upon being summoned, Taichi was somehow gifted with an immense amount of magic power, thus gaining tremendous magical abilities ranking him as natural and unique. After his first encounter with Cassim, Remia analyzes his unique magic to be a Summoner. 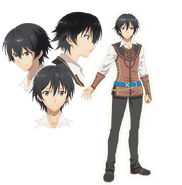 Retrieved from "https://isekai-chiito-majutsushi.fandom.com/wiki/Taichi_Nishimura?oldid=1362"
Community content is available under CC-BY-SA unless otherwise noted.